Meet the people behind the art 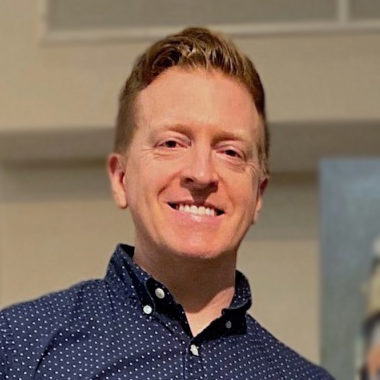 For Jason, art is about learning to see, and he has been using his ability to see and create art since he was 7 years old. He began taking private lessons at age 10, and his ability developed as he worked with gifted teachers. He pursued his love of art through high school, graduating from North Side HS in 1993, and graduated from Virginia Western on an art scholarship. He earned his B.S. in art education from Radford University in 1999.

Jason is experienced in many art media, including pencil, charcoal, acrylic, pen and ink, and clay. He has exhibited his work in local shows since age 13 and has won local, state and national awards. His work has also been exhibited at the New York ArtExpo.

Jason is known for his life-sized sculptures of well-known personalities such as Albert Einstein, Andy Warhol, and Dale Earnhardt. This work combines woodworking, carving, sculpting, molding/casting, and painting. His goal is for his work to be more alive and to create more interaction between his art and the viewer.

Jason is a life-long Roanoker. A kid at heart, he loves connecting with his students through humor while encouraging them in their artistic disciplines. In his free time, he loves playing with his children, working out, and studying the Bible.

Jason and Elizabeth began Fizer Fine Art in June 2011 with 4 students on Saturday mornings - teaching from the basement of their home. They could never have envisioned where God would take Fizer Fine Art all these years later. They delight in seeing the students grow in their skill while creating pieces of true beauty.

A word of recommendation from one of his students:

"Mr. Fizer has a bright sense of humor and always makes art class fun while he teaches us amazing things.” 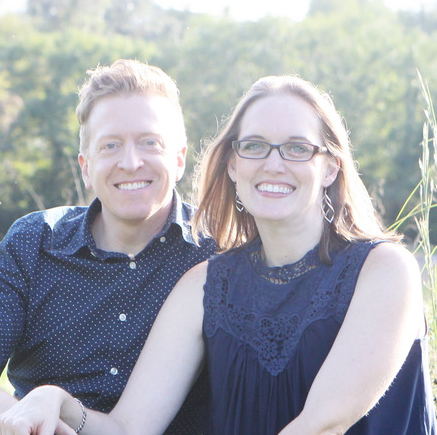 Elizabeth is the office manager supporting our excellent instructors. She’s the originator of emails you receive from Fizer Fine Art, and she handles registrations, scheduling, and billing. So if you’re missing a class and want to schedule a makeup class, please let her know.

She moved from Jamaica to Roanoke at age 9. She graduated from RVCS in 1996 and earned her BA in education from Cedarville University. Elizabeth and Jason got married (and started Fizer Fine Art) in 2011. They have a wonderful daughter and son. Elizabeth’s favorite place to be is at home, hanging out with her family. She enjoys Bible study and playing the piano. 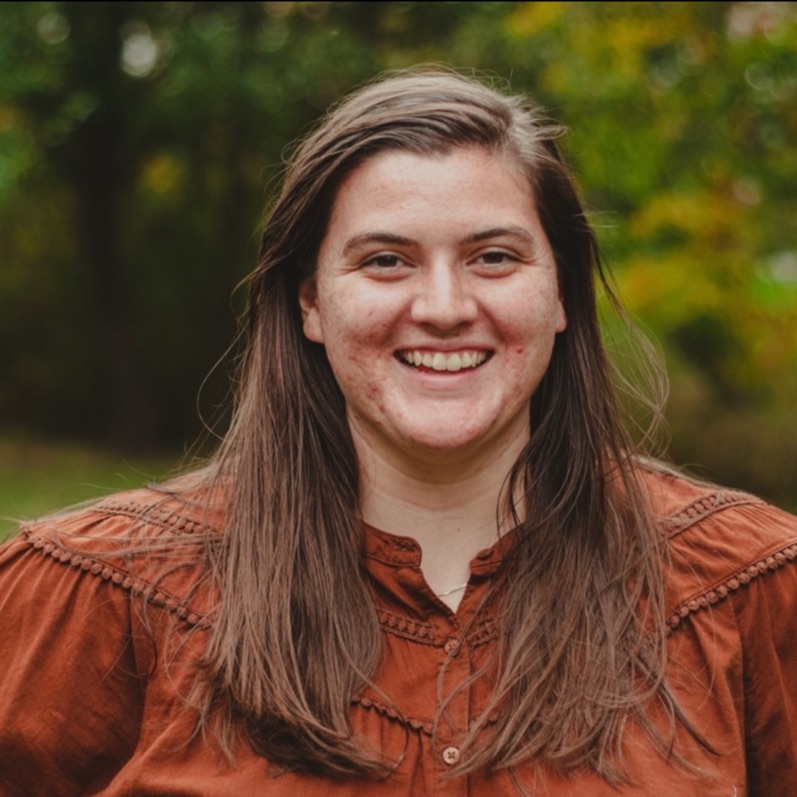 Sarah has loved creating art for as long as she can remember, but it wasn't until she started taking art lessons in the 6th grade with Fizer Fine Art that her talent began to show. She took art with Jason Fizer until she graduated high school. She earned her B.S. in Studio Art from Liberty University in 2022 and is currently working on her Masters of Fine Art. She grew up in Roanoke with her five siblings whom she loves to be around. 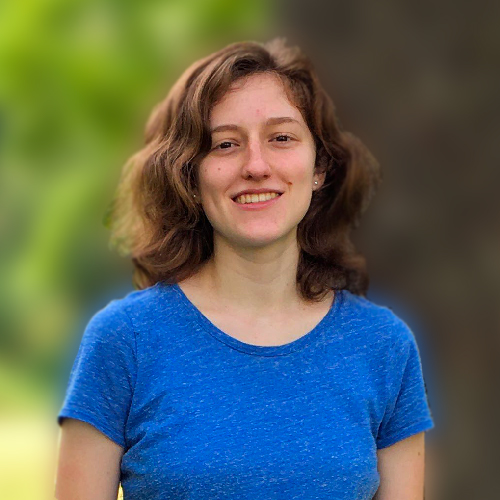 Gloria has lived in Roanoke all her life. Beginning at age 14, she took art classes with Jason Fizer for four years before joining Fizer Fine Art as an instructor in 2022. She was homeschooled through high school, and she earned her associate's degree at Virginia Western Community College in 2022. One thing that she loves about art is that it encourages her to look closer at everyday things and see how detailed and complex they really are.

Classes Throughout the year 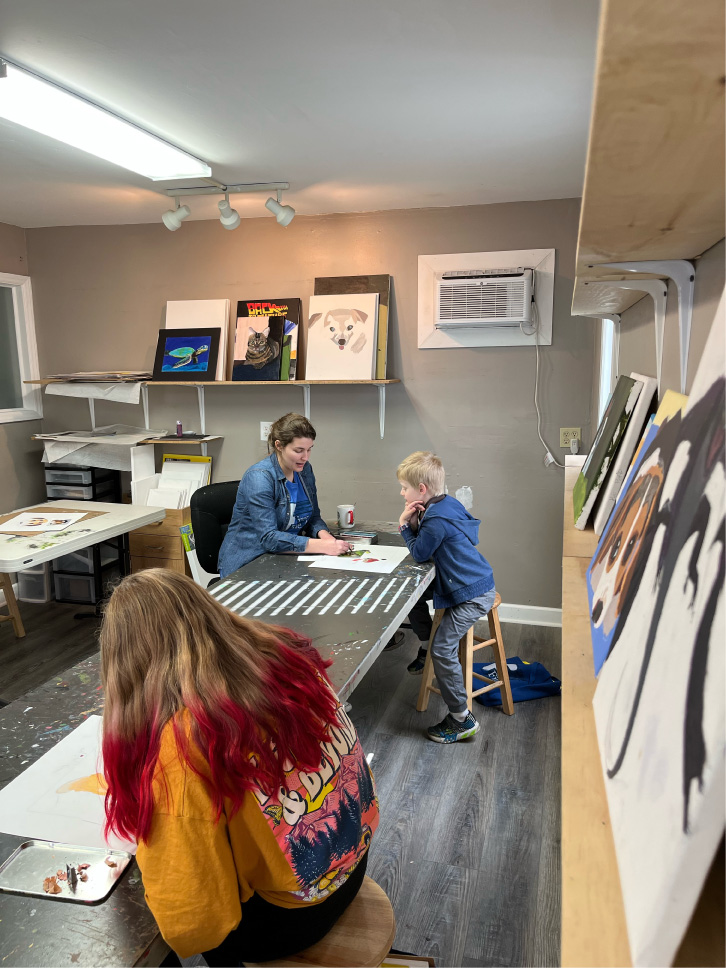 ALL THE FUN. LOTS MORE FLEXIBILITY.

During the summer, we enjoy offering a much more flexible schedule of classes. Classes run from June 13 to August 8 on Mondays to Thursdays. You can pick any 8 or more classes on ANY day at ANY time during ANY week that your chosen instructor offers them. Choose more than 8, and get 20% off each additional class! You can pick up to 2 classes in one day. You could create your own art week and have 8 classes in one week. Or schedule classes around your vacations and camps. Mix it up any way you’d like.

Our classes are kept very small (4-5 students) and all instruction is individualized to each student. 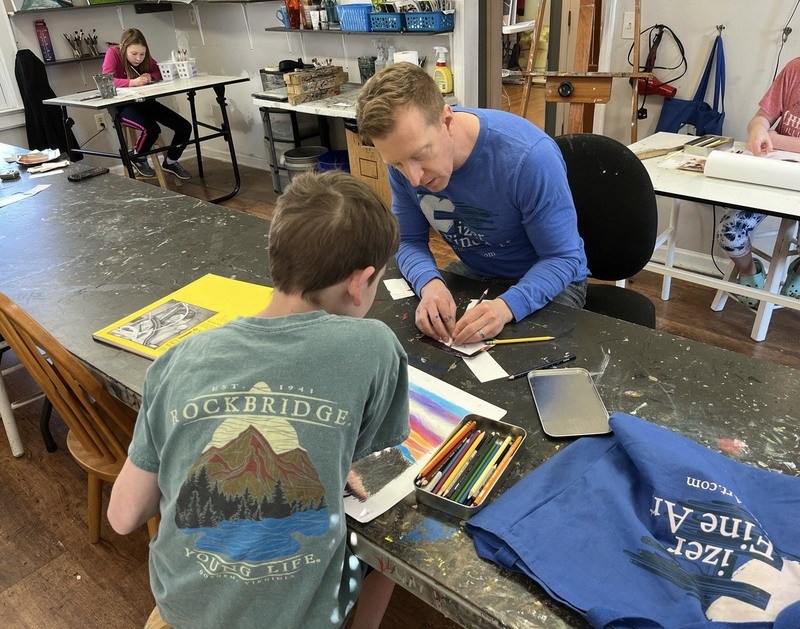 Students begin with at least 2 semesters of Drawing/Colored Pencils. This medium allows them to gain a solid foundation in critical art skills which can then be transferred to painting. They learn to draw and to gain mastery of color by layering and mixing color and by creating textures through color. In painting class, students continue to develop their drawing and color skills as they learn how the paint moves, blends, and interacts with the surface of the canvas.

School-year lessons are weekly, one-hour classes structured on a semester basis. Our classes are very small (4-5 students) and all instruction is individualized to each student.